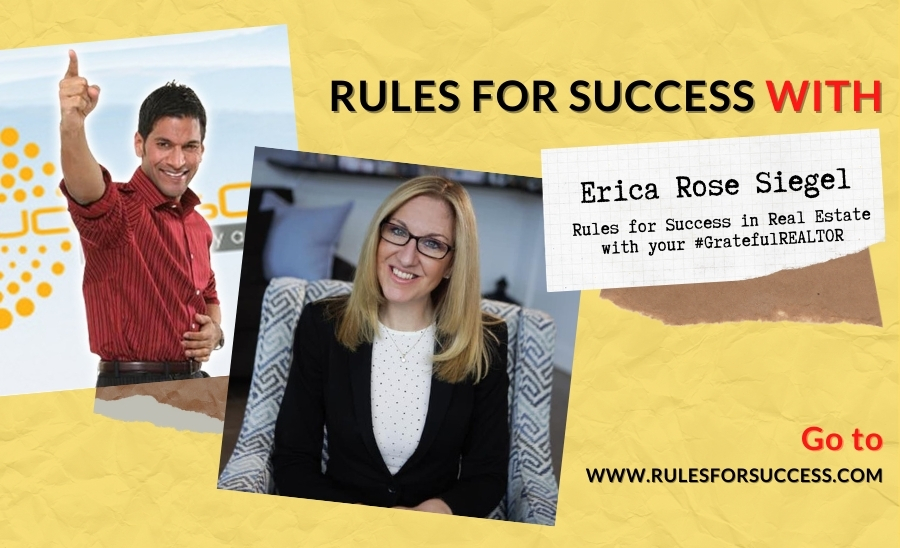 Here is our interview with Erica Rose Siegel, Licensed Real Estate Salesperson, CEO of EXIT Realty Central, and your #GratefulREALTOR, about her rules for success.

Erica is in the industry of helping people achieve their dreams while simultaneously achieving her own. She loves educating people about the real estate market which should come as a surprise as she is a former middle Mathematics teacher.

With EXIT Realty Central, she brings her passion for teaching in EVERYTHING she does. Her heart beats to give and watch people grow and to grow herself both physically, emotionally, financially, and spiritually. She retaught herself how to ride a bike again as an adult and has completed three 70.3 aka half-Ironman races four marathons and five half-marathons and has raised over $100,000 for cancer related charities and many people know her as #IronRealtor ! She’s overcome some pretty incredible struggles both personally and professionally and creating massive success; some may even call it magic.

Erica is mastering the methodology of Tony Robbins as using any problem she encounters as gifts she and others can grow from! She has been coaching with Sean Callahghy and the entire Unblinded Mastery Program since January and I’ve been a part of this community as well and watching her hero story rise and the influence and impact she is having on the world is a gift to experience.

Many of you know her as #gratefulrealtor and with over thirteen years in the business having the honor and the privilege of helping people throughout the United States and Canada, she has A LOT to be grateful for. She holds the key to the American dream and loves what she does and loves the team she works with and would love to connect and serve you!

If you want to know more about real estate in the United States or Canada, be educated about buying or selling property, or get the best deals, connect with Erica Rose Siegel at https://www.exitwitherica.com. Start your journey to freedom!